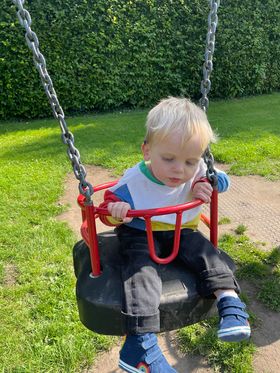 Myles is a fun loving, smiley, cheeky little boy who is full of determination and confidence.

He hasn’t had an easy ride. The first month of his life I discovered he sadly had 3 birth abnormalities.

These were Clinodactyly, which is a permanently bent pinky finger, severe “bilateral” (meaning both) hearing loss, and left hip dysplasia.  He was aided in both ears by 6 weeks old.

Then came various hip treatments and as time went on, amongst the failed hip treatments, he started to display cause for concern.

He sat and he rolled over, on time if not early. But by the time he turned 15 months and he still wasn’t kneeling standing or able to say anything but “baba” various professionals started to talk about “global developmental delay” I’d never heard of this before. But I now realise how common it is.

Myles had his 2 front teeth fall out from falling from sitting, this is because his hypotonia causes wobbliness. As time went on, I noticed no teeth were coming in and by the age of 2.5 I was concerned that he only had 7 teeth, “shouldn’t he have 15 or so by now” I thought, I took him to a paediatric dentist who confirmed he had hypodontia. This is one of the 4H’s within 4H syndrome leukodystrophy. I was made aware he may need braces and dentures when a teenager.

He was sent for an MRI scan on his spine, ears and brain straight after coming out of theatre for a hip operation, called open reduction. This had already taken 9 hours so to learn he was having a scan too, and that I wouldn’t be able to see him for even longer, made me panic and worry if he was OK.

Hours felt like weeks. I finally got to see him in recovery with both legs casted up and I was just happy to be reunited with him again.

My focus was ensuring he was pain free following a long operation, but we had to stay in hospital for a week due to nurses being unable to wean him off pain meds.

After a couple of months, I had a phone call from the paediatrician to discuss the results. She began by stating his ears were fine, there’s no cause for the deafness via MRI and spine was also fine, “BUT”. My heart sunk.

She said they had found significant hypomyelination across all of his brain plus the brain stem and cerebellar vermis is smaller than it should be , “hypoplasia” they said. Another H.

This took me a very long time to process but I eventually came to a point where I’d researched everything in depth to have full knowledge. They explained they would repeat another MRI a year later to check on the hypomyelination to see if any change (he’d be just over 2 years old).

Before the 2nd MRI occurred, upon clinical examination, Myles was also diagnosed with hypotonia , low muscle tone & weakness; another H. Alongside this, lots genetic testing was done including “microrary, fragile X, cmv virus test..” and 3 targeted tests which were: mitochondrial disease, TUB4A leukodystrophy and PMD leukodystrophy. All were clear.

It was also noticed following an antibody blood test he has NO antibody protection against tetanus and borderline low-normal to Hib. The immunologist instructed he had booster vaccines of these. I took him for these and I’m still waiting to find out if they worked or not.

It was finally time for the 2nd MRI, we did this in a different hospital because we’d moved house by this point.  General anaesthetic, despite watching the anaesthesia being given for now the 4th time, still didn’t get easier.

Results again took months but I was finally given an appointment with paediatrician and neurologist to discuss. The exact same results were displayed from when he had his first MRI except this time he also had cerebellar atrophy…

This was all explained to me in detail, and I was made aware that 4H syndrome leukodystrophy had been written at the bottom of the report by the radiologist to be considered. They tested him for this within the LD panel which consisted of all POLR genes for 4h and about 5 other leukodystrophy’s. I again researched thoroughly, everything.

My gut instinct was telling me 4H syndrome would be his final diagnosis. I joined the 4H families group, I researched and I attended all 4h family conferences, in spite of awaiting test results. I also got in touch with the Yaya foundation who kindly forwarded me the email address of a specialist, Dr Nicole Wolf. 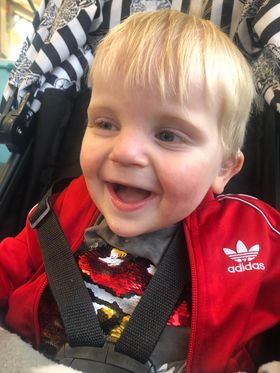 5 months had passed, and I still hadn’t received the genetic results so I asked Dr Wolf if she would kindly review his MRI’s because I was under the impression he does have 4h.

She did so and came back stating that she agreed it is this leukodystrophy he has. I felt listened too, believed. Also felt like the jigsaw puzzles were finally piecing together. Dr Wolf was very shocked to learn about his hearing loss and no antibody protection against tetanus because this is not a finding within 4H. She explained the hip dysplasia was a common finding within 4h though.

3 weeks later, the geneticist called me. Tuesday 12.15, she stated they had found two mutations in his POLR3B gene and that the diagnosis of 4H syndrome leukodystrophy was confirmed. I knew it. I felt a sense of relief, that may not be the correct wording, I would never want my child to have such disease, but I also knew my motherly gut instinct was right and I can now advocate and pray for a cure for this debilitating disease. I hope to do everything in my power to help all our children so that eventually, a cure is found.

Myles remains a delight. He is always happy and laughing and I could count on one hand how many times I’ve heard him cry. He lets nothing get him down and proceeds to try going above and beyond; remaining determined despite his setbacks.

As we’ve received this diagnosis just 18 days before Christmas, my plans are mainly advocation and to raise awareness over the festive period.

Because we’ve had singular disability diagnosis for so long, we have already altered how we spend our Christmas. Such as, with his hearing loss, and having to ensure the environment isn’t too noisy and that Myles isn’t distressed. I can’t say it will be much different this year.

Due to having the hypodontia diagnosis before the 4H was confirmed, this has helped me understand his feeding abilities and made me recognise just because it’s “standard and typical” to enjoy a Christmas dinner, it is truly OK for Myles to not be able to participate. He can enjoy his own particular foods, still fitting in.

If you’ve been inspired by Myles and would like to share your own story, please visit this page for more information.