Home > News > events > Our Fundraising Manager, Marlene Graham, shares details of her Give Up to Give Back challenge. 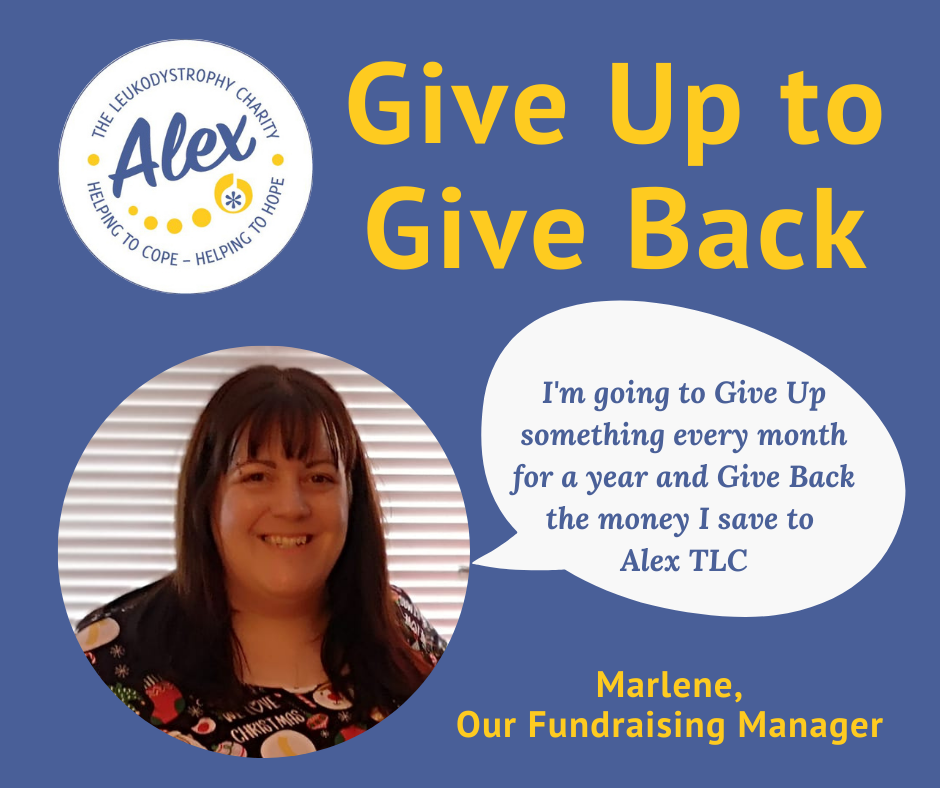 I’m still quite new to the team, having only started as Alex, The Leukodystrophy Charity’s Fundraising Manager in October, but I feel like I’ve been here much longer – in a good way of course.

My colleagues have been great and helped me to feel very welcome, even though I’m home-based, and live many miles away in Scotland.

Before I spotted the job ad for this role, I’d never heard of a genetic leukodystrophy. During my research, I watched videos about the charity and read personal stories. What struck me most, was how quickly some people who are affected can lose certain abilities, and essentially have to give up things they used to be able to do.

Giving up some of the things I enjoy doing seems so trivial in comparison, but I have signed up to take part in Give Up to Give Back because I know that the money I raise will be put to good use to support those affected, raise awareness and advance medical research.

I’ve decided to Give Up at least one thing every month throughout 2022, starting with alcohol in January. This will be an especially tough challenge as I celebrate a big birthday towards the end of the month. I’ll Give Back some of the money I save, as well as asking for sponsorship. My friends and family have supported so many of my fundraising activities over the years, and it can be difficult to keep asking the same people, but I hope to raise at least £500 over the course of the year.

I would love for you to join me in taking part in Give Up to Give Back and you can do so by filling out the registration form on this page.

Even giving something up for a week would help to make a difference.

If you would like so sponsor Marlene, you can do so by visiting her JustGiving page.