Fiona Willis tells us all about her Mum, Bronwen’s, ongoing journey 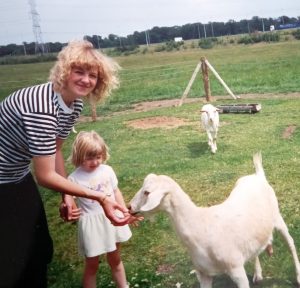 My Mum is an amazingly kind, funny and beautiful human being. As a child, I grew up surrounded with all the animals she would rescue and rehabilitate, mostly birds and hedgehogs, but we also had a rather large collection of pets (all contained within a small, terraced house in Kent!). She taught me very early on the value of all lives (even the little ones), and would often pick up bumble bees from the pavement with no fear, to put them somewhere safe. For much of my childhood, mum was a single parent, and regularly went without food herself to ensure myself and my animal siblings were well fed.

Mum’s issues started about 7 years ago, when she was in her late 40s. She began having problems with communication, and lost some of her common sense. She unfortunately lost her job, and also stopped taking in wildlife from the local vets, which was very out of character. I went along to several mental health appointments with her, but it was all put down to depression and anxiety, so I tried to support her the best I could in the years that followed.

However, more recently she began to experience problems with word finding, she had more noticeable personality changes, developed a tremor, and began picking at her skin, to the point where she had marks all over her body. She also lost the ability to cook a meal, and her driving began to scare me. Something told me this was more than anxiety, so in February 2020 I took her to the doctors and explained my concerns. The GP performed a routine cognition questionnaire, and although she took her time, she managed all the questions, and so he concluded it was nothing to worry about. However, my concerns continued to grow, and in May I finally got a referral for a neurology assessment. Luckily I was able to book time off work to be with mum for the phone assessment, because once again, mum was told it could be anxiety, and was about to be discharged, when I grabbed the phone and pleaded for an MRI with the (very important and very british) argument that “she takes her tea differently now!”.

Unfortunately, due to administrative errors, mum’s MRI was delayed until September. I remember it was the most beautiful sunny evening, and I was sitting outside a mobile unit on the hospital site, watching the sun go down. After about 20 minutes Mum exited the unit and, in good humour as always, exclaimed to the radiologist “So, did you find a brain?!”.

The MRI showed extensive white matter changes, and the local neurologist was baffled by the results, he told me it was dementia (possibly vascular- despite mum having no risk markers) and didn’t really know how to proceed. We waited weeks to be referred on to a stroke clinic, which however much I chased just didn’t seem to be happening. Due to suspicions I had about mum’s dad,  I ended up doing my own research, which led me to the specialist cognitive impairment team at the National Hospital for Neurology and Neurosurgery in London, and mum was finally referred to them in December last 2020.

We had the initial consultation in January 2021 and were told that her MRI was unusual (scary coming from one of the top professors in the field) but that it most resembled something called Leukodystrophy. Our family history was also very relevant, as my grandfather passed away from a mystery neurological illness back in the 80s. Mum was referred for a whole host of tests, including lumbar puncture, genetics and full psychological assessment. 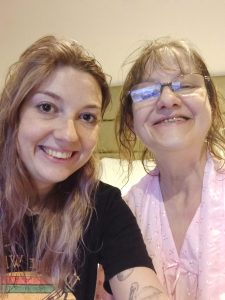 Unfortunately because of covid, mum’s tests were delayed until July. We spent 4 nights in London, Mum was in hospital for 2 of them, and I was at a local Premier Inn down the road. Despite covid restrictions, I was allowed to stay with mum on the first day, as the professor wanted to speak to me about the genetic implications of mum’s illness – unfortunately this took place on a very busy ward, and somehow the pale blue curtain felt a little too thin for the intensity of the conversation we were having. Mum was discharged later than planned, so I booked an extra night at the hotel for her to recover  – unfortunately we were caught in a very heavy rainshower on the way back, but this didn’t dull our elation that the tests were finally over and done with. Unfortunately, this wasn’t the last hospital stay for mum that month. 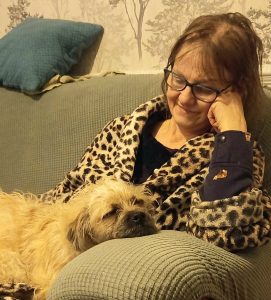 The week after mum’s tests, she suddenly started speaking gibberish, which prompted me to dial 999. She was taken to hospital and diagnosed with a TIA, after I was initially told that “Everyone over 50 gets a bit confused sometimes”. She was prescribed aspirin, and we were sent home. Ten days later the same thing happened, but this time she was blue-lighted to hospital and had a huge seizure upon arrival at the hospital. I sat next to her as she lay unconscious for 4 hours, and a very keen young doctor told me he’d never met a patient with Leukodystrophy before, and it was very interesting – I think mum is a bit of a medical unicorn. Mum was in hospital for 4 days unable to form basic sentences, and we were told she’d had a stroke. However, in her review in September this was confirmed to be a nasty seizure that had caused a bleed. Luckily, she was prescribed an anti-seizure medication during her hospital stay, and has not had another one since. Mum’s dad had several seizures in the lead up to his death, so it’s amazing to me that a medication can simply stop this from happening.

We finally received mum’s genetic results at the end of June 2022. She has ALSP (Adult-onset leukoencephalopathy with axonal spheroids and pigmented glia), a type of leukodystrophy that causes changes in personality, thinking, and muscle function, eventually causing people to develop dementia and later decline into a vegetative state. My aunt is now awaiting her appointment to be tested as she is having symptoms, which may or may not be related. I am also waiting for my genetics appointment because I would like to know either way if I am going to go on to develop the disease, to plan my life accordingly.

A rather exciting development is that mum has been accepted onto a clinical trial with Vigil Neuroscience – unfortunately this means a lot more trips to London and more gruelling tests, but mum wants to help in any way she can, and there is a possibility it will benefit her too. It has given us a small glimmer of hope for the future.

Mum’s strength throughout this ordeal has utterly amazed me; she’s been put through some pretty horrendous tests, and is often treated like a performing monkey by excited doctors, but she never once complains. Despite being more reliant on me now, she is still very much my mum, and is still chief tea-maker and washer-upper in our house (something I am incredibly grateful to her for). We’ve always fought life’s battles as a team, and this is something I am determined to continue with, through what is probably the darkest time of our lives. Luckily we have our cheeky, cuddly pup, Basil to keep our spirits up!