When her sons were diagnosed with Adrenoleukodystrophy, Deirdre Corr finally had an explanation for her own and her sons’ symptoms. Read on for her story of the effect this had on her family, how they have coped with ALD and the value of support from Alex TLC 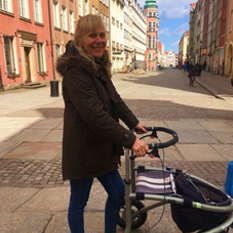 Deirdre began to develop unexplained symptoms and walking difficulties at 27 years old and was encouraged by her mother to keep active through exercise, such as swimming and cycling. As a physiotherapist, her mother was ideally placed to support her daughter as this unexplained condition worsened.

A neurological examination suggested a virus or even Multiple Sclerosis to be the cause of Deirdre’s increasing difficulties, with other symptoms ascribed to Irritable Bowel Syndrome. It was later discovered that her foot had dropped, making walking difficult and suggesting an underlying neurological, muscular or anatomical problem.

Deirdre suffered partial paralysis in her other leg shortly after visiting the neurologist. Support from her mother brought back her mobility only after months of effort. As she returned to her active lifestyle, Deirdre’s symptoms subsided, and she put her worries about their cause to the back of her mind.

It was only when her two sons were diagnosed with Adrenoleukodystrophy (ALD) years later that Deirdre discovered that she was a carrier of this condition. Although less common and less severe than in men, women can suffer with symptoms of the adult form of ALD, Adrenomyeloneuropathy (AMN) and this finally explained Deirdre’s previous difficulties. 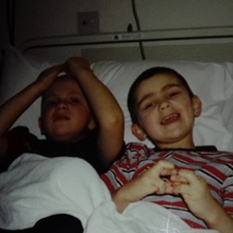 A definitive diagnosis brought little comfort in managing Deirdre’s condition: the devastation of Ruairi and Tom’s diagnoses overtook her own needs.

Ruairi, Deirdre’s eldest son, suffered from severe adrenal crises from around the age of 3. His younger brother Tom also became ill from these crises, with insufficient levels of a hormone called cortisol often making them severely ill for days at a time. Doctors initially suspected a virus before an eventual diagnosis was made: both Ruairi and Tom had Addison’s Disease.

Addison’s Disease, affecting the adrenal glands on top of the kidneys, is very rare. As this condition had affected both of her sons, Deirdre suspected that the underlying cause may be genetic. Her online research led her to Adrenoleukodystrophy, and she persuaded doctors to test both of her young sons. Although Addison’s is a common symptom of ALD, doctors were sceptical as ALD is so rare. They agreed to the tests to put her mind at rest.

Tests were carried out on both Ruairi and Tom, to establish the levels of Very Long Chain Fatty Acids (VLCFAs) in their blood. Abnormally high levels of VLCFAs are a common indicator of ALD. Results in both boys were high, with genetic tests confirming that both Ruairi and Tom had Adrenoleukodystrophy.

Doctors in their Northern Irish home town told Deirdre and her husband to take the boys home, where they should make them comfortable. They were told to cherish their remaining time together, which was expected to be short.

Deirdre, however, was not willing to give up on her sons. A nurse herself, she set about researching ALD, soon discovering specialist doctors in England who gave her and her family hope.

Physician and ALD expert Professor Colin Steward saw the family, initially advising against a Bone Marrow Transplant for Ruairi for fear that his condition was too advanced. A Bone Marrow Transplant can be very effective for treating ALD but must be carried out before the condition has a severe effect on the brain and nervous system, as demonstrated by several tests including MRI and neuropsychological testing. Although initial tests had not given encouraging results, the family encouraged re-testing. Ruairi’s results were better in this second neuropsychology test, and with Professor Steward’s agreement, the transplant was allowed to go ahead. 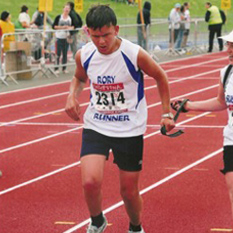 Ruairi and Tom both underwent Bone Marrow Transplants for their ALD in 2001, just a few months apart. Aged 6 and 5 at this time, the transplant was to affect them both very differently.

For Tom, there was no family match. A UK-wide search began to identify a donor, which was successful in discovering the only match in the UK. The donor was found before Tom’s transplant was confirmed, with changes shown in MRI scans prompting the procedure to go ahead just a few months after Ruairi’s.

Ruairi’s transplant took place at the age of 6 and was made possible by bone marrow donation from his older sister Aisling, who was a match. At 7 years old, Aisling cheekily persuaded nurses to allow her to stay in hospital following the donation, keen to make the most of the medical attention and sympathy which would so often go to her brothers. Although Aisling was allowed to consent to the donation, girls under 18 are considered too young to consent to be tested for ALD.

An important reason for the need for Bone Marrow Transplant to take place early in the development of ALD symptoms is the 12-18 months it can take to have an effect on stabilising the condition.

Tom became violently ill following his Bone Marrow Transplant, as complications had increased pressure on his brain. Spinal taps to remove cerebrospinal fluid were able to reduce this pressure, and thankfully he recovered.

The family moved to England in 2002, a few months after the boys’ transplants, to allow Ruairi to attend a specialist school recommended by Professor Steward. This school allowed him to develop the skills needed to cope with his disabilities. 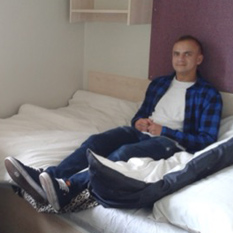 Forced to research the condition and seek out specialists herself, Deirdre wishes Alex TLC had been around for this part of the family’s ALD journey.

Founded in 2004, Alex TLC had not been established when Deirdre’s family were facing diagnosis and bone marrow transplant. Deirdre found comfort in peer support such as from Karen Harrison and her family, whom she met when sons from the two families received transplants around the same time. Now Support Services Manager at Alex TLC, Karen was to be an important source of support for Deirdre both before and during her Alex TLC career.

When Alex TLC began to run Community Weekend events, Deirdre and her family were unable to attend due to Ruairi’s condition and constant support needs. As he got older, however, Deirdre felt more able to leave him with a carer in order to attend. She describes the events this year and in 2016 as fantastic, as she valued the opportunity to speak to other families and learn more about the condition.

Alex TLC has been able to support Deirdre and her family even years after the transplants, by fighting to ensure that key support is not taken away.

Ruairi has long received care from specialist carers, trained to administer emergency hydrocortisone injections. Last year, it was decided that these trained carers should be removed, with emergency services to be called if these injections were needed. Ruairi can deteriorate very quickly when his hydrocortisone levels drop, and Deirdre protested that this decision was unsafe. The family considered taking the case to court to ensure that Ruairi could still receive this desperately needed care.
They turned to Alex TLC, who wrote letters in support of the family and of continued specialist help for Ruairi. They also wrote to doctors and endocrinologists to encourage them to do the same, ultimately ensuring that the decision was reversed without the need for a court case.

Today, Deirdre’s family are able to cope with the effects of ALD and carry on with their lives, reassured by knowing that Alex TLC will be there to support them through any challenge.

The family were so appreciative of the support they have received from Alex TLC that daughter Sinead worked to fundraise an incredible £3,172.64 by climbing Kilimanjaro in 2016. Sinead, now 20, was tested for ALD at 16 and does not carry the condition. Her older sister Aisling does not want to be tested.

Ruairi, a diligent and compassionate fundraiser himself, was inspired by Sinead’s story of a blind man in Malawi. He appreciated that blind people in Malawi could not access the support he had in the UK and has fundraised to build a house for this man by completing two half marathons. Now 23, Ruairi has discovered a love of metal work. As he finishes his education, he hopes to work on private commissions with the help of a blacksmith.

Tom, studying for his undergraduate degree in Wildlife Ecology and Conservation Sciences, is independent and able to manage his Addison’s Disease; the only indicator of the terminal ALD diagnosis he once received.

ALD has been part of the family’s life for many years now, but they continue to learn about the condition and receive support through events such as the Alex TLC Community Weekend. This year, for example, as Deirdre’s symptoms began to worsen once more, she has started using electrical stimulation for her legs. The Community Weekend allowed her to meet and gain advice from other women using this for their own symptoms.

By sharing her story, Deirdre hopes to let others in similar circumstances know that they are not alone. She is keen to help others to find the right support, and to increase awareness so that those with ALD get the diagnosis they need as soon as possible. If you need further support or information, or would like to discuss sharing your own story, please contact us.

Photos used with permission by the Corr family