Georgia tells us about her Son Myles’ diagnosis of 4H leukodystrophy 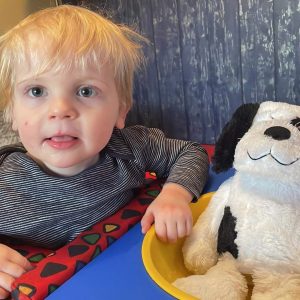 Myles is a fun loving, smiley, cheeky little boy who is full of determination and confidence. He hasn’t had an easy ride. The first month of his life I discovered he sadly had 3 birth abnormalities. These were Clinodactyly, which is a permanently bent pinky finger. Severe “bilateral” (meaning both) sensorineural hearing loss, and left hip dysplasia. He was aided in both ears, by 6 weeks old. Then came various hip treatments:- these consisted of 2 operations, 1 brace and 1 harness. These failed. And as time went on he started to display cause for concern. He sat and rolled over on time if not early but by the time he was around 15 months old he still wasn’t high kneeling let alone standing. Various health professionals mentioned and had diagnosed him with global developmental delay and hypotonia (low muscle tone throughout)

Hypotonia meant Myles was constantly wobbly (and still is). This caused his 2 front teeth to fall out from falling from sitting. As time went on I’d noticed no teeth were beginning to replace those that’d fallen out and I was concerned he only had 7 teeth at the age he should have a full set. I took him to the paediatrician who referred us to a paediatric dentist who there confirmed he had something called Hypodontia (missing tooth condition) this is one of the 4 h’s within 4h leukodystrophy. I was told he’ll need a full set of dentures, reconstruction work, and braces, as he gets older. His specialists were looking into causes of his hearing loss and decided to perform an MRI of his ears. They chose to scan his spine and brain too. I didn’t think anything would come of this. At all. Months after the scan I received a call from his paediatrician who’d had the results. She started off stating his ears and spine had no abnormalities whatsoever, great I thought- didn’t think you’d find anything anyway.

“His brain..” she paused a pause that felt never ending. My heart sunk.

“We have found significant hypomyelination across his entire brain”

Hypomyelination is the 2nd H in 4 H. Hypomyelination is where there is NO covering of brain nerves meaning messages are not able to be sent to the body correctly. This wasn’t it. She continued to tell me how he had hypoplasia of his cerebellar vermis and of the brain stem (this means they’re smaller than it should be). I felt numb. She explained they’d repeat another MRI scan in a years time to see if there’s any development on his hypomyelination as it was showing at newborn stage. The 3rd/4th H in 4H leukodystrophy is called hypogonatropic hypogonadism. This is the inability for the body to instruct puberty to occur. I don’t know yet if Myles has this aspect as he is way too young to start puberty.

Before the 2nd MRI they performed: microrary, fragile X and CMV virus test. All were clear. Then they did targeted genetic testing for: Mitochondrial disease and PMD (Pelizaeus-Merzibacher Disease) these were clear. Then they tested him for TUB4A H-ABC leukodystrophy. This confused me because his basal ganglia is normal on his MRI. I had to wait 8 months just to be told he didn’t have TUB4A leukodystrophy, it had gotten temporarily lost apparently. I became rather inpatient with waiting for test results and so I did research of my own. I just knew he had 4H leukodystrophy before we had the genetic results. I’d researched, spoke to 4h parents, attended conferences and my gut was just telling me this was the LD Myles has.

Everyone around me didn’t believe it, they didn’t believe he even had a leukodystrophy because he “wasn’t having seizures” or “hadn’t regressed” I knew otherwise so I stuck to my gut. I asked the 4H specialist Nicole Wolf to kindly review his MRI videos, she did and confirmed 4H, I knew it. This time of course I wanted to be wrong but upon receiving genetic results I wasn’t shocked and of course everyone else was. The second MRI revealed the same things as the first except this time unfortunately they found mild atrophy of his cerebellum too. We recently met with Dr Livingston who is an expert neurologist with interest/experience in leukodystrophy. He made me aware Myles is the first ever documented 4H patient to of not only been born with 6 teeth but to of been born with sensorineural hearing loss too.

Myles remains a delight. He has a big smile and a warm heart. I’ll never stop advocating for his needs. Unfortunately he was found to have immunology concerns, no antibody protection to tetanus- no ones ever heard of this within 4H. He had boosters vaccines but sadly they failed and made no difference. I find out next week what the next steps are. I will continue to raise as much awareness of 4H syndrome as possible and continue to educate all health professionals.

Holding on to hope always.