Janis Sherwood’s US-based organisation, Fight ALD, works to raise awareness of ALD among medical professionals, to increase timely diagnosis. She has collaborated with many other organisations to introduce New Born Screening in numerous states around the US. 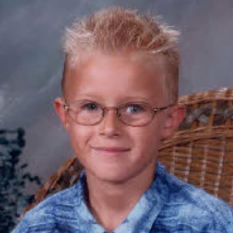 At the age of 8, Janis’ son Sawyer began to develop migraines. He struggled to concentrate and would often become ill. Doctors diagnosed him with Attention Deficit Hyperactivity Disorder (ADHD) and recurring viral infections.

When he began to have severe migraines, Janis became concerned that there may be something seriously wrong, and asked for a CAT scan for her son. She was assured that there was no medical or financial justification for further tests, and that the medication he had been given would control the migraines.

Three weeks later, Sawyer was struck by another serious migraine. Despite taking his prescribed emergency medication, he developed a worsening fever, becoming unresponsive. Rushed into hospital, it was discovered that this was an adrenal crisis – caused by adrenal insufficiency, or Addison’s Disease.

Tests were conducted to find the cause. Twelve days later, the family received confirmation of a devastating diagnosis: Sawyer had ALD.

Sawyer’s diagnosis came too late: his condition was already too severe for treatment. He was given between 6 months and 2 years to live, with no hope of recovery. 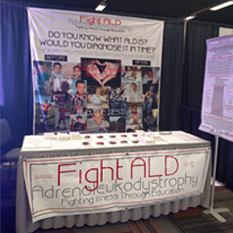 Janis was determined to fight for her son. She researched ALD, learning all she could about the condition, and met specialists in the hope they could at least slow his deterioration. In many cases, the doctors she met knew less about ALD than she did, shocking and frustrating her. She worried for other families – how could young boys be diagnosed if doctors did not know what to look for, or appreciate the need for a timely diagnosis?

As she fought to explore all possible avenues to save Sawyer, his condition worsened daily, particularly his vision and hearing. Nothing Janis did could help him, and he passed away in September 2003, 6 months after being diagnosed.

Devastated to have lost her son, Janis remained troubled by the lack of awareness of ALD among specialists she had met. She decided to create an organisation to tackle this issue, educating medical professionals about ALD, how to diagnose it, and the life-saving potential of early diagnosis.

This became the Fight ALD Foundation, an officially recognised US non-profit organisation from May 2004. 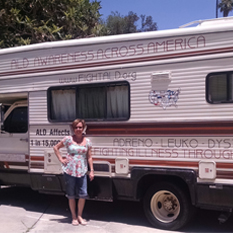 Janis travelled across America, attending Continuing Medical Education conferences for medical professionals. For five years, she sought out conferences for specialists who may have contact with boys with ALD, hoping to teach them to identify it early.

Through her Fight ALD website, other families had discovered Janis’ mission. She was contacted by families with stories very similar to her own: young boys with attention issues misdiagnosed, common signs missed and diagnoses made too late. Like Sawyer, many of these boys had been hospitalised following adrenal crises.

Contact from these families encouraged Janis to keep fighting, while also giving her an idea for a change of tactic: emergency departments. With so many of these boys brought into hospitals with adrenal crises, Janis saw these as key opportunities for ALD diagnosis. Lack of awareness in emergency departments meant that these opportunities were often missed, with devastating consequences. To change this, Janis would have to get back on the road.

Using an RV which was generously donated to Fight ALD, Janis set off to reach children’s hospitals and emergency departments across the country. To increase the impact and visibility of her mission, she decorated her vehicle with awareness-raising messages. 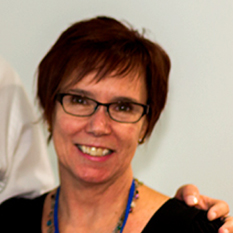 Within her first week, Janis realised she was driving past paediatric clinics which would also benefit from her information. She had a huge task ahead of her but decided that these were too important to miss, returning home to map a new route to include as many clinics as possible.

This 7-month planned trip soon escalated, becoming another 5 year effort which reached 48 states, 215 children’s hospitals and over 2000 other medical facilities.

On her return home, Janis was contacted by the Myelin Project, a research, advocacy and family support organisation for those with ALD. The Myelin Project had heard of Janis’ work and wanted her on board with a project hoping to take her goal of early diagnosis to a new level: new-born screening for ALD.

Diagnosing ALD in new-borns allows them to be closely monitored for signs of progression of the condition, dramatically increasing opportunities for a life saving bone marrow transplant.

Janis travelled to Sacramento to lobby the Assembly and Senate to change legislation and allow this screening of new-borns in her home state of California. Success in passing this legislation was dampened by a last-minute amendment: ALD must first be added to the federal recommendation panel’s list of approved conditions. Undeterred, Janis and her fellow campaigners travelled to Washington D.C., successfully lobbying the Secretary of the Advisory Committee to include ALD on this list.