Steven Sims believes that all men with adrenal insufficiency where the cause is unknown (idiopathic Addison’s Disease) should be tested for adrenoleukodystrophy (ALD).

Adrenoleukodystrophy is a rare, genetic condition which causes progressive deterioration in young boys, eradicating their ability to walk, talk and eat unaided. This usually results in death within a few short years, especially if the diagnosis comes late. The majority of those with ALD also have Addison’s Disease, yet a diagnosis of idiopathic Addison’s Disease often does not prompt testing for ALD in adults. 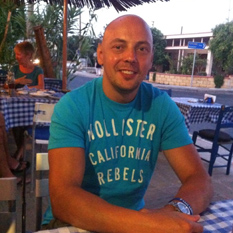 Steven is the subject of a research paper on this connection between ALD and Addison’s Disease, having waited years for his ALD diagnosis.

In his teenage years Steven was often ill, with his symptoms attributed to gastroenteritis. He was finally diagnosed with Addison’s Disease in December 2002. Those with Addison’s Disease are unable to produce certain hormones in their adrenal glands, so use medication to replace these. Steven must take this medication for the rest of his life, increasing the dosage in periods of illness or stress to prevent life-threatening adrenal crises.

Although able to control symptoms of his Addison’s Disease, Steven began to develop walking difficulties including a limp; friends noticed he had begun to drag his right leg. In 2009 Steven went back to his doctor with these issues and with urinary retention, which proved so severe and painful that he was catheterised – an unusual decision for such a young man. Doctors and endocrinologists began to consider the cause, suggesting ALD as a possibility. When the condition was described to him, Steven saw comparisons with the life of his own brother, Leigh, who had experienced similar symptoms, before passing away in 1982 aged just 12.

This connection to his own family history prompted testing for ALD, including checking levels of Very Long Chain Fatty Acids (VLCFAs). People with ALD are unable to metabolise VLCFAs, therefore it’s often used as an initial diagnostic test for ALD. Steven’s high VLCFA levels and a further genetic test confirmed the diagnosis. He was given devastating news: his doctor said his ALD meant that he had just 5 years to live. By this time he had two young daughters who, according to Steve’s doctor, were now likely to lose their father before reaching their teenage years. ALD is an X-linked genetic condition, meaning it is inherited through the X chromosome. Steven’s daughters, as all daughters of affected men, are therefore carrier of ALD. 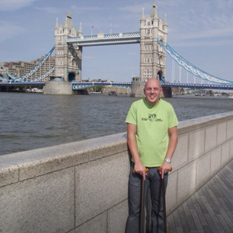 Steven and his family were shocked and devastated. Terrified by the short time he had been given and his worsening symptoms, Steven left his job in a printing factory.

Through their own research, the family found ALD Life, who connected them with others in the same situation. It became apparent that his symptoms were more consistent with adrenomyeloneuropathy (AMN), a form of ALD presenting in adults. AMN has serious effects on the individual’s ability to walk, as well as effects on bowel and bladder movements. The condition is painful, restrictive and without cure, but ultimately does not present such a devastating prognosis as ALD: the news that Steven would live just 5 more years was inaccurate. This was later confirmed by specialist doctors.
This misinformation had caused Steven and his family incredible distress, as his wife and young daughters were faced with a future without a husband or father. Despite being diagnosed with Addison’s Disease 8 years earlier, the connection between this and ALD or AMN had not been explored. The majority of ALD and AMN patients have Addison’s Disease, and while testing children with Addison’s Disease for ALD is common practice, this does not seem to be the case with adult males: Alex TLC have had several cases reported to them where men with a pre-existing Addison’s Disease diagnosis have never been tested for ALD. In many cases this testing could save lives. Steven is determined that this become standard procedure, a goal also pursued by ALD Life. Once his AMN diagnosis was confirmed, Steven consented to be part of a research paper on family history in patients with ALD, in order to further professional understanding of the condition. 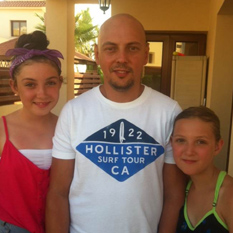 Although Steven now has an accurate diagnosis, with a longer life expectancy than he had feared, he still suffers the painful effects of AMN. Attempts at pain relief have proved largely unsuccessful: today he takes Vitamin D to ease increased pain and muscles spasms of the winter months and Botox injections to the bladder to help him to sleep through the night.

In addition to these concerns, Steven and his family fear worse is to come: 1 in 3 men with AMN go on to develop cerebral ALD. Steven has regular MRI scans to detect signs of this. A few years ago, these scans showed lesions on his brain and he was recommended for more thorough, more frequent scans with gadolinium, a dye used to improve the quality of MRI images to detect inflammation. Any inflammation around these lesions would indicate the onset of cerebral ALD.

If scans show progression of cerebral ALD in Steven’s brain, he is as prepared as possible. For now, he waits to see if this will ever be necessary. 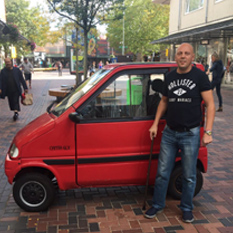 In the meantime, Steven has become an active member of the Alex TLC community, connecting with others to share advice and seek support through the Health Unlocked platform and regularly attending Community Weekend events. It was at an Alex TLC Community Weekend that Steven learned of a new clinical trial, for which the pharmaceutical company were looking for participants with AMN.

Steven applied to take part and was accepted on to the trial, hopeful that it will bring some relief to his condition.

Hope brought by the trial and knowledge and peer support driven by Alex TLC have helped Steven to become more positive about his AMN, his symptoms and his future.
For more information on how Alex TLC can support you or your loved one with ALD or AMN, or to connect with those in similar conditions, contact us.