Karen is our Support Services Manager. She feels passionate about her job because of her own experience of adrenoleukodystrophy (ALD). 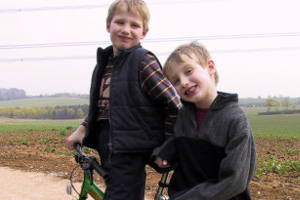 Alexander and Cameron are born in March 1996. They are happy, healthy, perfect identical twins.

Aged 5, Alexander develops a squint in his left eye. We take him to see a specialist who diagnoses Divergence Excess, a weakness of the eye muscles. I had the same as a teenager, so we don’t believe it’s anything to worry about. Alexander has to wear glasses and is given some eye exercises to develop his muscles.

A year later and Alexander’s teacher is concerned he’s been missing a few things in class and suggests a hearing test. On our summer holiday, Alexander becomes very disoriented. He’s normally a very confident, outgoing boy but has become very dependent on his brother when we are out.

By August, Alexander’s symptoms are becoming more pronounced. He’s confused, can’t hear us and is losing track of time. Our GP notices the change and fast tracks our referral to a specialist, which is refused.

We are so anxious to see a specialist that we end up paying to see a private consultant. Alexander is sent for an EEG to check his brainwaves for epilepsy. His brainwaves are abnormal, and we are sent back to the NHS for an MRI scan. A brain stem test reveals that signals are not reaching his brain correctly.

Alexander’s symptoms are so bad he’s unable to go back to school. In October 2002, we take him to see a Neurologist at Addenbrooke’s hospital. The consultant strongly suspects adrenoleukodystrophy (ALD) – a destruction of the white brain matter. He explains it’s genetic and advises us to get Cameron tested urgently. We are numb with shock.

Cameron and Alexander have to have MRI scans and genetic tests I also have to be tested. Alexander’s MRI scan confirms demyelination of the brain. And there is no cure.

We tell our family but I’m still in denial. I want to believe that there’s a treatment or even a cure for this disease. I’m also heavily pregnant with our third child.

The genetic tests come back positive for ALD and I am a carrier.

On 17th October 2002, Glenn is born. There’s a 50% chance of him having ALD but tests thankfully show he is not at risk. 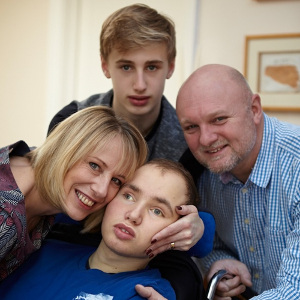 Just a few weeks later, Cameron is also diagnosed with ALD. Doctors tell us he’s a good candidate for a Bone Marrow Transplant but it must happen urgently before the condition starts to progress within his brain. We move our family to Bristol where Cameron undergoes intensive chemotherapy to prepare him for the transplant. Cameron’s dad, Jonathan, will be his donor.

Cameron has his transplant before Christmas. Afterwards, his blood cell counts don’t increase. His body rejects the transplant.

The hospital finds a local bone marrow donor and doctors start Cameron on chemotherapy again. But the donor pulls out. We’re devastated. Cameron has no immune system and is at grave risk of catastrophic infection.

We decide to try again using my husband’s stem cells. In early 2003, Cameron has his second transplant and the medical team trial an experimental anti-rejection drug. It’s a success and he finally leaves isolation.

We finally come home from our ‘Bristol Bubble’ and Alexander’s condition continues to deteriorate. By April, he can’t speak, walk or see and is suffering from muscle spasms. We have to feed him through a tube.

Making the most of family time

Cameron is now blind, deaf and unable to speak. He’s fully dependent on us for his care but still a very happy boy in his own way. He attends a day centre for the deaf and blind where he enjoys swimming, music therapy and games. We have carers who come in to help care for Cameron at home.

We always make sure we have a family holiday together and make the most of our time together. We want Glenn to live a normal teenager’s life. He’s a wonderful caring son. He and Cameron are very close.

I met Sara Hunt in early 2003 via the Myelin Trust. They passed my details to Sara and she called me within half an hour. We formed an instant bond and became firm friends. I gave Sara my full backing as she was setting up ALD Life, as it was then, in 2004. 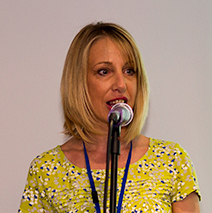 In 2013, I began working with the charity as a Project Manager, raising awareness of ALD and Addison’s disease.

I loved the support aspect of the job and took on the role of Support Services Manager. I support families in all aspects of living with a leukodystrophy. I advocate for families at meetings, accompany to hospital appointment and visit families at home, offering emotional and practical support. Speaking at events to raise awareness of  leukodystrophies is an important part of my job and I am often asked to present at conferences around the world. I also work alongside medical professionals and support groups for rare diseases. It’s a hugely rewarding role and I’m excited to develop and improve our range of services for the individuals and families who need our support.

If you need support please contact me on karen@alextlc.org